David Hankins: A Writers of the Future Winner Spills His Secrets

David Hankins: A Writers of the Future Winner Spills His Secrets 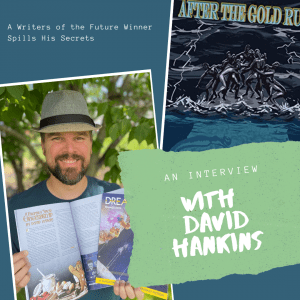 David Hankins, aka The Lost Bard, is an example of what determination, focus, a good mentor and a unique voice can achieve. A recent third place winner of The Writers of the Future contest, Hankins will be packing his bags for Hollywood and becoming one of the rarified talents learning the ropes from the best in the science fiction/fantasy world and then attending the annual awards ceremony. A member of the Wulf Pack, Wulf Moon’s writing group specifically geared to helping authors win this contest, Hankins talks about his journey and future plans.

AF: Tell us about your writing journey and why you first picked up a pen?

DH: Like any good fairy tale, it all started with food. Namely, vegetables. I discovered that my daughter (a toddler at the time) would eat anything we put in front of her if I was telling stories, particularly stories about the pictures on the dining room walls. This progressed to bedtime stories as I tried to convince her to Go To Sleep through inventive storytelling. That always backfired. I’m here to tell parents everywhere that story time is a sham invented by kids to avoid bedtime. After several years of “Just One More Story”, I started transcribing everything to keep my storylines straight. Children are ruthless in identifying mistakes in fairy tales. That grew into two and a half novels that agents were quick to reject. Like all new authors, I was devastated. I turned to short stories, figuring I could win a contest or two to add credits to my cover letter and then everyone would live happily ever after.

As I now know, writing isn’t that simple. Before the win comes a lot of rejections. I understood the basics of constructing a story, but I needed to refine the art and craft of it. And that takes smart practice. Since finding Writers of the Future in December of 2020–and finding Wulf Moon’s Super Secrets, which I’ll talk about in a bit–I have been published in DreamForge Magazine (March 2022), Factor Four Magazine (June 2022), and Third Flatiron’s After the Gold Rush anthology (July 2022). I have also been accepted for Wonderbird Press’s inaugural anthology Murderbirds! whose Kickstarter launches September 9th.

AF: You recently learned you are a winner of Writers of The Future, can you talk about that? DH: I was floored when I got the call that I was a finalist. I’ve been entering Writers of the Future for 18 months. It’s the biggest short story contest in the world, and I’d made the top eight? Woah. My heart soared when Joni Labaqui (contest coordinator) told me that Jody Lynn Nye (contest coordinating judge) called my entry ‘a funny story’. Jody’s a humorist writer by trade, so if she found my story funny, I must have done something right. Then–after two weeks of excruciating silence–I got the second call. Third place. I couldn’t believe it. I ran upstairs and yelled, ‘We’re going to Hollywood!’

AF: Do you have any advice for other authors who wish to send stories to Writers of the Future?

DH: Take the Writers of the Future FREE online workshop, then study Wulf Moon’s Super Secrets. The workshop gives the basic building blocks of a good story and Moon’s Super Secrets will polish those blocks into a work of art fit to make a jaded editor cry (or laugh, in my case). I found the Super Secrets on the Writers of the Future forum and read the entire thread (160 pages now and growing). Changed my writing forever, but that was a lot of digging for nuggets of gold. Fortunately, Moon’s publishing the secrets in a series of books, the first of which will be published in late September 2022. You can find more information at https://driftweave.com/the-super-secrets/ . Oh, and take Wulf Moon’s Master Classes. They are incredible and will take your writing to the next level. My first published story “A Properly Spiced Gingerbread” (picture provided) came from Moon’s Kill Your Darlings Master Class. But remember, these writing tools aren’t magic that will suddenly make your stories perfect. That comes through hard work and smart practice. The writing life isn’t easy, but it is incredibly rewarding.

AF: Can you talk about the Wulf Pack and how you became “Keeper of the Records?”

DH: The Wulf Pack Writing Group is led by Wulf Moon and grew from the year-long Super Secrets workshop he was leading on the Writers of the Future forum. Currently you gain access by taking one of Moon’s paid workshops, but is changing soon to a Patreon. The Wulf Pack is a tight-knit group that works together to achieve respectable sales and win Writers of the Future and other contests. As for how I became the Keeper of Records? That’s a fun story. When I started reading Moon’s Super Secrets thread, I got so excited that I asked if I could join his ongoing annual workshop. He politely declined. ‘Sorry, buddy, but enrollment is closed. And you need a Silver Honorable Mention or above to get in.’

I worked through the Super Secrets, did the exercises, and posted my results. I became really active on the forum and threw myself into learning and writing. Within two quarters, I earned a Silver Honorable Mention.

I was among the first to join this year’s challenge when Moon opened enrollment. I was surprised and honored when he asked me to be his Keeper of Records for both the annual challenge and the Wulf Pack Writing Group. It’s a fun title that basically means I’m his assistant. He said he’d been watching me and knew I had the drive to succeed. His previous two Keepers also won Writers of the Future. We’ve set a trend now.

AF: You spent some time in the US Army, can you talk about your role and experiences? How has this reflected in your writing?

DH: I just retired after twenty years. The Army was fantastic, a great career to satisfy my incurable wanderlust. I’ve had fifteen addresses in twenty years and have lived in or traveled through much of Europe, South-Central Asia, and the United States. Most notably, ten of those years were in Germany, which is where my daughter was born and this whole writing adventure began. I loved exploring obscure locations and tumble-down castles wherever I traveled. Many of my second-world fantasy stories are based on what I’ve seen in my travels.

AF: Now that you’ve retired from the army, what is your next career path? DH: Eventually, I’d love to fund my wanderlust through writing and writing-adjacent activities. Until then, I’ve recently started a position as a military logistics inspector. I’ll be inspecting units around the world, ensuring that all of their logistics processes are being run according to regulation and applicable laws. It’s not glamorous, but I’ll have plenty of time to write as I travel.

AF: Can you talk about your writing process? How many hours a day, where do you write, any secrets to productivity?

DH: I write when I can. I’ve tried setting a schedule, but haven’t settled into anything yet. Too much turmoil in my life recently with retirement, vacations, job hunting, and the like. Regardless, I try to write a little each day, even if it’s only a couple hundred words. Possibly the hardest lesson I’ve learned was turning off my internal editor. It’s okay to write rubbish, just get the story down. Edit later. When I do that, my productivity soars. I’ve tried writing in coffee shops and breweries recently, but have found the noise and activity too distracting. My best writing comes in my dedicated writing space when I’ve turned off all distractions (and fed the yowling cat).

AF: What’s in the future for the “Lost Bard”?

DH: I’m switching gears back to my original plan of writing novels. I love short stories and will continue writing them to explore aspects of my worlds, but my focus right now is completing my next novel before the Writers of the Future workshop in April. And from there? We’ll just have to wait and see.