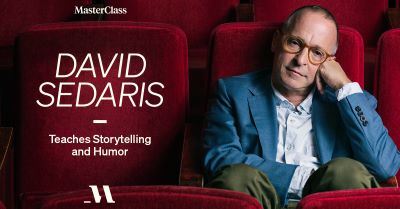 MasterClass has a new course out for creators that you might be interested in checking out – “David Sedaris Teaches Storytelling and Humor.” Now, many of you might be familiar with Sedaris though he isn’t a fiction writer. The very fact that he doesn’t pen fiction is exactly why you might be interested in this one. We all know that a major bonus to add creativity to our writing is to draw inspiration from genres that we don’t write in, and David’s unique and entertaining writing style could easily be a key source in helping hone your craft.

Here is what you can expect from the class:

With regular pieces in The New Yorker, national tours, and appearances on NPR’s This American Life, David Sedaris is one of the most recognizable essayists writing today. He’s known for his wit, weirdness, satire, and serious humor, and his collections of personal essays—Naked, Me Talk Pretty One Day, Dress Your Family in Corduroy and Denim, When You Are Engulfed in Flames, and Let’s Explore Diabetes With Owls—each became immediate bestsellers. He’s also the author of a New York Times–bestselling fable collection and has twice had his work included in “The Best American Essays” anthologies.

So far, more than 10 million copies of his books are in print around the world, and he’s been nominated for three Grammy Awards for Best Spoken Word and Best Comedy Album. Now the writer Entertainment Weekly calls the “preeminent humorist of his generation” teaches you his tools for writing humor and his approach to the art of personal storytelling.

In David’s MasterClass, learn to turn everyday observations into stories with meaning, craft personal essays that resonate from beginning to end, and incorporate humor that not only gets a laugh but also connects with readers on a deeper level. Join David backstage as he workshops and perfects his public readings and find inspiration in his approach to publishing and the writer’s life. Find stories and inspiration all around you, hone your humor writing, and embrace the power of your personal perspective.

In this online class, you’ll learn about:
• Fine-tuning your observational skills
• Turning observations into stories
• Perfecting your opening line
• Writing with meaning
• Connecting with readers and live audiences
• Writing about family and friends
• Turning vignettes and diary entries into stories
• Tools for writing humor
• Getting the most out of public readings
• Creating and titling collected essays

You can check out a preview of the course in the video below:

If you’re interested in learning more, head over to MasterClass today!